That reality has put downward pressure on most automakers’ stocks for the last several months. But there might be bargains within the group. Both Ford Motor Company (NYSE: F) and BMW AG (OTC: BMWYY) were investor favorites earlier in the decade, when rising profits and strong leadership impressed Wall Street. But with a growing sense that tough times lie ahead, investors have been looking elsewhere.

Those investors might have overlooked a gem or two. Below, we’ll compare these two former favorites to see if one (or both) might be worth buying now, despite concerns about the economy.

How Ford and BMW compare on valuation and stock performance

Both Ford and BMW have had a bumpy ride in the stock market over the last 12 months. But U.S. investors might be surprised to learn that, of the two, it’s BMW that has lost the most over the last year. 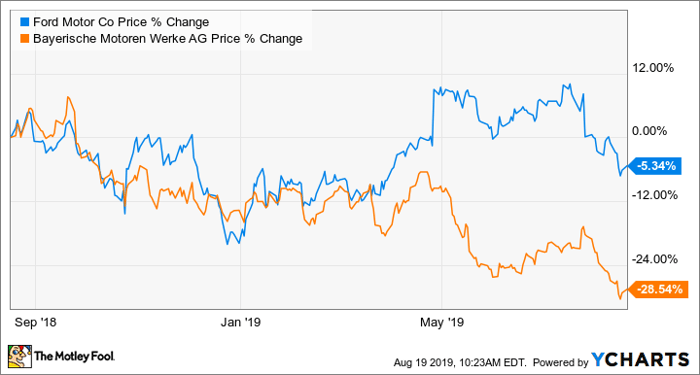 F data by YCharts . The chart shows the percentage change in the stocks of Ford and BMW over the year ended Aug. 18, 2019.

Turning to valuation measures based on earnings, both companies look somewhat cheap at the moment. Automakers have historically traded at around 10 times earnings during periods when sales have been strong, but both are well below that level now. BMW is currently trading at about 8.3 times its earnings over the last 12 months, while Ford is trading at about 6.9 times its adjusted earnings over the same period.

(Why use adjusted earnings for Ford? Ford had a big noncash accounting charge in the fourth quarter of 2018 related to the valuation of assets in its pension funds and had mostly noncash restructuring-related charges in the first and second quarters of 2019. If we include those charges, Ford’s price-to-earnings ratio jumps to about 16.5, which seems misleading. In this case, adjusted earnings give us a better sense of the company’s actual valuation for comparison purposes.)

The BMW X2 is one of several new SUVs that the company is introducing to help offset the steep costs of its future-tech initiatives. Image source: BMW AG.

How Ford and BMW stack up on dividends

Both companies have paid good dividends in recent years, and with their stocks undervalued now, their dividend yields look quite impressive. Based on dividends paid over the last year, Ford’s dividend yield is about 6.6%, while BMW’s is 5.1%.

But can we count on those dividends being sustained through an economic downturn? Automakers are cyclical companies, meaning that sales rise and fall with consumer confidence. Because automakers have high fixed costs (factories, tooling, labor contracts), a modest decline in sales can have a dramatic effect on their bottom lines. Historically, automakers have tended to cut or even suspend their dividends during recessions.

Ford takes a very different approach. The company has paid a quarterly dividend of $0.15 per share since 2015. In 2016, 2017, and 2018, years in which its profits were strong, it chose to pay an additional “supplemental” dividend early in the year while holding its regular dividend steady.

Why not just raise the regular dividend? Ford wants its shareholders to be able to count on that regular dividend, so it has been set at a level that Ford feels it can maintain through a recession. The company has said repeatedly (and emphatically) that it is prepared to maintain steady dividend payments through the next recession , whenever it arrives, in order to demonstrate to long-term investors that its dividend is reliable.

Given Ford’s sizable cash hoard ($23.2 billion as of June 30, 2019) and the fat stream of cash generated by its captive-financing subsidiary, it’s a credible plan.

These aren’t exactly growth companies. Both are mature industrial giants with high fixed costs and global scale. But we can sometimes find earnings growth — for a while — with automakers that are restructuring.

Ford is currently in the midst of what CEO Jim Hackett calls a “redesign” of its global business. The goal of Hackett’s redesign is to maximize profits from Ford’s traditional automaking business while expanding into technology-enabled opportunities around personal and commercial mobility that aren’t necessarily centered on building and selling cars and trucks.

What does that mean? In practice, it means refocusing Ford’s product efforts on high-profit products in segments where it has an advantage — pickups, SUVs, commercial vehicles, and performance vehicles, as well as the Lincoln luxury brand — while de-emphasizing its efforts in lower-profit segments like small and midsize sedans. Simultaneously, it’s investing aggressively in technologies like self-driving while exploring other mobility-on-demand opportunities (like scooter and bike rentals).

This redesign isn’t cheap. Ford expects to take about $11 billion in one-time charges related to the restructuring over the next couple of years, though a significant portion of that will be noncash accounting charges. But if it’s successful — and early signs are good — then Ford should be able to deliver improved margins starting in about a year.

Like Ford, BMW is investing heavily in future technologies, including electric vehicles and a self-driving effort in partnership with Intel and Fiat Chrysler Automobiles , among others. Those efforts are important to ensuring that BMW remains a major player as these technologies transform the industry, but they’re expensive, and there’s no clear near-term path to profit growth. BMW is in the midst of launching several new SUV models to help boost its cash flow, but it has warned that those models may only partially offset that increased research and development spending.

BMW is adapting its factories to produce internal-combustion, plug-in hybrid, and fully electric vehicles on the same assembly lines. It’s a costly effort, but BMW believes it will help the company adapt quickly to shifts in demand. Image source: BMW AG.

Is Ford or BMW the better buy today?

As I see it, here’s the bottom line: Both companies are spending a lot of money on future technologies, including electric vehicles and self-driving systems — but only Ford also has a plan to not just offset that spending but actually boost its overall profitability in time.

Ford’s stock is cheap in part because Wall Street has been skeptical of Hackett’s redesign effort — mostly because Ford took a long time to share details of the plan. But now, with substantial progress already visible in Ford’s most recen t quarterly report s, it’s increasingly clear that the Blue Oval is on the right path.

Meanwhile, BMW cut its 2019 guidance after the first quarter and is hoping that its new X Series SUVs help offset the steep costs of ramping up electric-vehicle production. BMW isn’t in serious trouble, but there’s no clear path to earnings growth over the next few years.

Again, it’s hard to recommend any automaker when the economic picture is cloudy. But that said, I think that if one is prepared to hold for at least a few years while reinvesting dividends through any upcoming recession, it’s hard not to like Ford at current prices.

When investing geniuses David and Tom Gardner have a stock tip, it can pay to listen. After all, the newsletter they have run for over a decade, Motley Fool Stock Advisor , has quadrupled the market.*

David and Tom just revealed what they believe are the ten best stocks for investors to buy right now… and Ford wasn’t one of them! That’s right — they think these 10 stocks are even better buys.

Zeen is a next generation WordPress theme. It’s powerful, beautifully designed and comes with everything you need to engage your visitors and increase conversions.

Note: I have the ability to revoke this permission at any time and ask for the removal of my personal data collected by contacting us or simply clicking Unsubscribe.